In general, traditional strength training workouts are performed in one plane of movement. The muscle recruitment pattern is limited or isolated on machines while being concentric in nature (shortening of the muscles).

These exercises for the core could include Pilates exercises on the mat or equipment, which allows us to stabilize the core, pelvis, and shoulder girdle while effectively and efficiently working the extremities.

A core strengthening workout may include an exercise ball workout, which challenges our core body stability with a moving object such as a swiss ball. 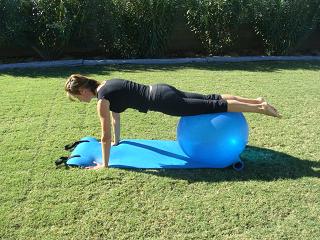 In any case, the best exercises for the core are generally performed in all planes of motion, as closed chain movements, and involves eccentric (lengthening) loading of the muscles for better energy utilization and endurance.

Core strengthening exercises generally involve closed chain exercises, which have been shown to be less stressful on the joints and they also mimic activities of daily living to a better extent.

An open chain movement would be like a traditional leg extension machine. Studies have found that the forces placed on the knee during this exercise are very extreme. This machine isolates the quadriceps muscles while the hip and foot are not doing anything to help stabilize the knee joint. This, in turn, adds excessive forces on the knee joint during the exercise.

Get Your Core Body Workout

My Pilates Core Ball Workout DVD here has over 30 minutes of ball exercises designed for a women's body and needs.

In contrast, closed chain movements include any movement where one body part is in contact with a solid surface, such as with a squat or lunge. Both feet are in contact with the ground, which is unmoving, so during a lunge and squat the feet and hips are able to stabilize the knee joint decreasing the pressure and increasing the core body functioning.

Traditional exercises are often concentric in nature meaning they are force producing and generally precede eccentric loading. Concentric contractions generally involve a shortening of the muscle that takes away the energy of the movement.

Exercises for the core focus on core strengthening and eccentric muscle contractions that involve lengthening or stretching muscles while working them.

Pilates exercises do this very well, especially Pilates done on a core ball like the ones shown in the video below.

Imagine trying to jump up in the air without first flexing the knees, hips, and trunk. This is eccentric loading, which stores three to nine times more energy than concentric contractions.

Core strengthening workouts follow pure human movements, which function first through an eccentric loading phase, which decelerates, or loads the muscles (lengthens). Then, the energy is transformed into concentric, unloading phase of action.

Leave core body workout and find out more ways you can do exercises for your core here.

Have your say about what you just read! Leave me a comment in the box below.

Articles and Exercises for You!